The King Receives A Modern Relic Of His Father 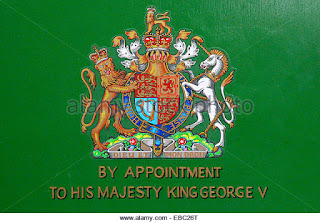 In the 1930s the public mark of royal patronage was the emblem of a successful and prestigious business. So much so, that the members of the Royal Warrant Holders Association were sufficiently well-off to afford to build a (small) country house as a gift for the sovereign. The £50,000 (perhaps £5m in today's money) needed was raised by open subscription. Sadly, the intended recipient, George V, died before the house could be completed, and it fell to his son, Edward VIII, to take possession.

The King's House at Burhill in Surrey was built using materials entirely sourced from the British Empire, including Canadian silkwood panelling, Maltese marble floor-tiles and Indian silver door handles. Somewhat tactlessly, the master key still bore the cypher "KGV" albeit bearing a crown set in rubies and diamonds. The uncomfortable generational sandwich was completed by the anme of the second guest room: "Margaret Rose" after the King's niece. The house had much to commend itself to the King's taste for things modern: automatically opening wardrobe doors, polished concrete kitchen floors, a glass portico garage which allowed cars to be washed in all conditions, and, of course, a hidden built-in cocktail cabinet. For all this, the King's one recorded visit was on the day of the presentation and the house was sold into private hands in 1954.