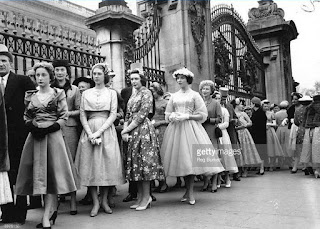 Six months after the death of George V, the Court moved out of full mourning and into half-mourning. This meant that more-or-less the full range of social functions could resume. The first of these was a large garden party at Buckingham Place. It was the traditional occasion for new presentations at Court.

300 debutantes were there to make their formal curtseys to the King, but the event was marred by the weather. Only half of the debutantes had passed through the Royal presence, when it began to rain heavily. The girls were having to queue in the open, and, to save them from getting drenched, the King ordered the ceremony to be stopped. The Lord Chamberlain later announced that those ladies, who had missed the cut would still be deemed to have been officially presented at Court.