Marseillaise and the Internationale at the Front Populaire's First National Day 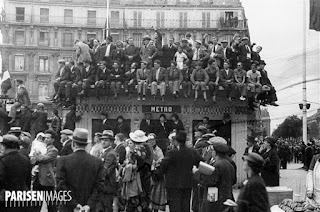 France's first national day under the Front Populaire passed off reasonably quietly, although there were scuffles between extremists on both sides. The Garde Mobile riot police were much in evidence. The traditional military parade on the Champs Elysee featured an impressive array of hardware. The newly introduced Dewoitine low-wing monoplane fighter was particularly admired, but in truth it was already obsolescent: little more than a First World War pattern biplane with no upper wing.

In the iconography of French politics, there was one major departure from tradition. The government held a rally on the Place de la Nation in the afternoon. The address was, and still is, a venue for demonstrations of the left. The crowd sang both the Marseillaise and the Communist anthem, the Internationale. The colour red predominated on flags, scarves, button-holes and even miniature phrygian bonnets in allusion to the Revolution.