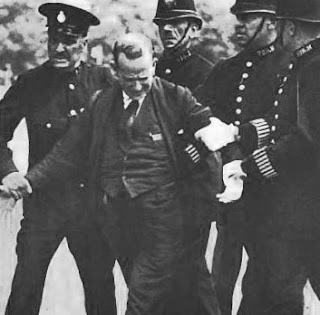 The King showed impressive courage and sang-froid, when he was the target of an attack by an armed man as he returned from presenting new colours to three battalions of the Guards in Hyde Park. As he rode down Constitution Hill, a man in the crowd wearing a brown suit drew a revolver as though to shoot him. There was a scuffle with other people in the crowd and the gun was knocked from his hand, flying towards the King's horse. The King thought it was a bomb, but rode on without giving any sign that anything untoward had happened.

The attacker was immediately arrested. He proved to be an unstable Irish journalist called Jerome Bannigan, going under the alias of George McMahon. His motives were obscure and he claimed that he was merely staging a protest. He was at the fringe of the Fascist movement and had some contact with MI5. He  received the remarkably lenient sentence by today's standards of six months in jail. The King was chiefly annoyed that the incident swamped coverage of the speech he had made to the Guards, calling for peace.