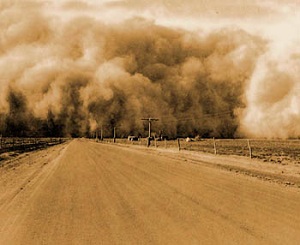 Just as the US economy and financial system was struggling to escape the effects of the Great Slump, a natural catastrophe ravaged a large area of the country. Since 1933 drought and dust storms had devastated agriculture in the plains states, bringing destitution to hundreds of thousands, and forcing huge shifts in population towards the West. A heat wave in 1936 made things even worse. These were the Dust Bowl years, which marked US culture from John Steinbeck's The Grapes of Wrath to Dorothea Lange's photographs.

President Roosevelt announced a series of measures to alleviate the effects. A quarter of a million families were to receive assistance of some kind, including job creation programmes. He himself would tour the worst-hit areas and, in a prime example of Rooseveltian double-think, promised that he would not make any "political" speeches there as the situation was too serious." There was no promise to exclude journalists from the programme.